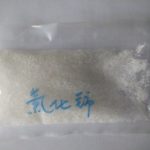 Cerous chloride heptahydrate use as analytical reagent and catalyst, which is also raw material for production of metal cerium. It applies to medical intermediate, hard alloy additive, cerium salts and chemical reagents.