Angew.Chem.Int.Ed:Relationship Between Relative Solvating Powder of Electrolyte and Shuttling Effect of Lithium Polysulfide in Lithium-Sulfur Battiers 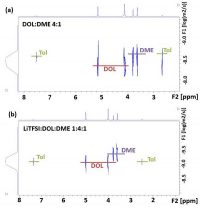 Li-S battery is widely considered as prospect large scale energy storage application, because it owns extremely high specific capacity on theory and sulfur is non toxic and cheap. However, the rapid decline and low coulomb efficiency of lithium-sulfur battery capacity prevent it from commercial large scale uses.  During reducing sulphur electrochemical into lithium sulfide, lithium polysulfide (LiPS) intermediate’s side reaction is thought as main cause of the rapid capacity decline and low coulomb efficiency. Constraining LiPS in interior of anode and solve dissolution of LiPS is common strategy, for example nano carbon, polymer binder and metallic organic frame work. However the methods reduce the energy density. Another method is using new electrolyte solvent that is with low solubility for LiPS to replace usual electrolyte solution, for example mixture of DOL and DME. The experiments prove the method is a success in improving coulomb efficiency of Li-S battery. Further, some researches indicated solvent state’s importance in LiPS dissolution.